Last week Satya Nadella was announced as the new CEO of Microsoft (see http://www.microsoft.com/ceo). This was met with a lot of reaction in the world and also on the social networks. I decided to analyze the tweets on Twitter using my favourite tool Excel and a special Twitter Analysis add-in that we have made available through http://husting.com/twitter-analytics-for-excel/ . I opened the twitter analytics sheet and did a new query. Here’s what I searched on:

There is really a lot of info that you can get from the Excel sheet. I cannot cover all of it, but I’ll share some screenshots:

What I found interesting is the hashtags and mentions. Of course #microsoft, #ceo and #satyanadella are the top three hashtags but #Manual is on fourth place. #cybersecurity and #hacking take sixth and seventh place respectively. Looking at the mentions I noticed @satyanadella, @billgates and @Microsoft, but also @bill_nizzle. Not sure what he is doing there J

In the top screenshot some slicers are shown that enable you to filter the data at will to slice and dice to more insight.

One thing I especially like is the tone map that displays whether a tweet was positive or negative. It also has a map so you can see where the tweet came from and allows you to play back the number of tweets over time: 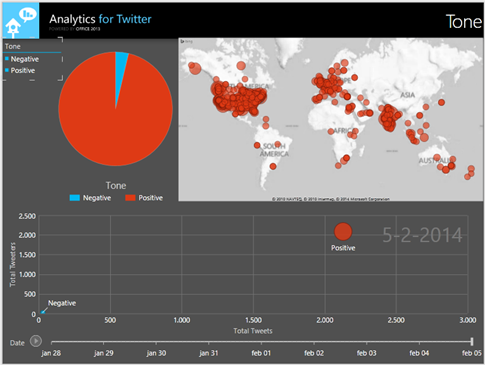 Only a small amount of the tweets were negative and when I selected negative tweets only I saw the following: 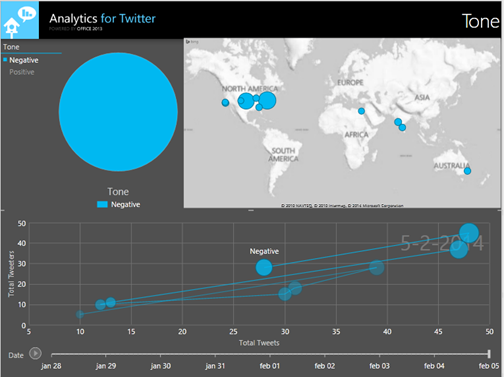 It seems like in Europe we have not been tweeting negatively on this subject (at least in the timeframe I recorded). The US is most negative and also there were some negative reactions from Nadella’s home country India, from Australia and Egypt.

This is a very easy way to do any kind of on the spot Twitter analysis using Excel. The Excel sheet used is freely available via the link above. Enjoy!

Stepping back into the ring.